In 1973, a group of scientists discover the mysterious Skull Island. With a sinister reputation, they seek out assistance from a team of explorers and military aid to travel with them. Their exploration uncovers that the treacherous land is home to the colossal King Kong. Almost eight decades since his first appearance, Kong: Skull Island once again brings the famed creature back to the big screen with classic monster movie magic. 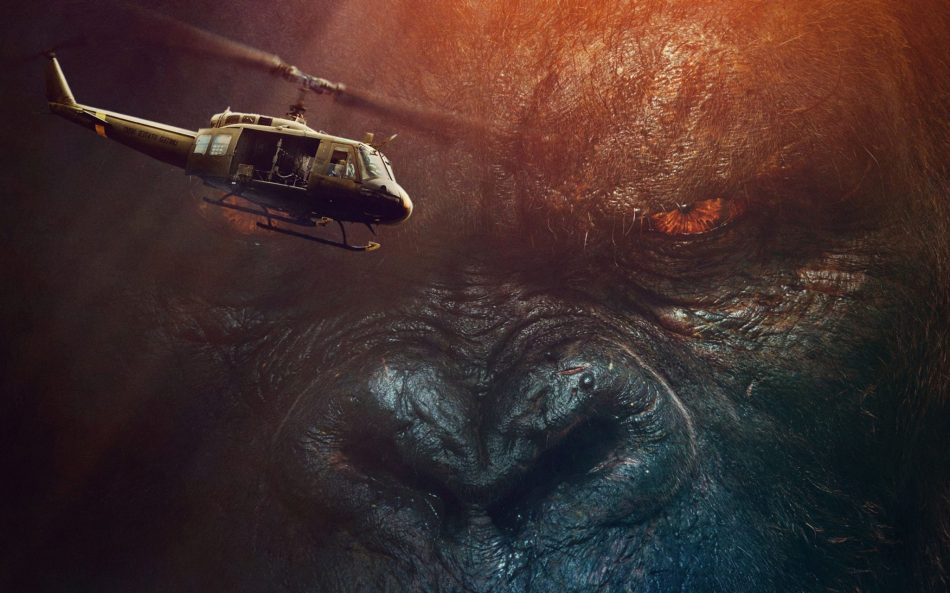 After William (John Goodman) and his colleagues, geologist Houston (Corey Hawkins) and biologist San Lin (Jing Tian), uncover the location of Skull Island, they assemble a large scale team to assist them on their expedition. They hire James Conrad (Tom Hiddleston), a British Special Air Service Captain who excels in tracking, to help them with the uncharted land. As a safety precaution, Lieutenant Colonel Packard (Samuel L. Jackson) and a group of his soldiers are brought in for one last mission. Rounding out the group is a team of scientists and photojournalist Mason Weaver (Brie Larson).

Once they reach the interior of the island, the team is welcomed by a massive ape, angered by their disturbance to his home. The team is quickly attacked and separated into the unknown terrain. But it is not just a grumpy Kong they need to worry about, as the island houses many dangerous and massive beasts. It quickly goes from a mission of discovery, to a mission of rescue.

The film wastes no time introducing us to the beloved King Kong, quickly giving us a glimpse of the creature before focusing on the assembly of the crew. While it takes some time to get back to Kong, the excitement builds steadily as we’re getting acquainted. Although for a film with so many characters, you didn’t feel like they were being emotionally shoved down your throat.

While monster movies can sometimes falter in its own magnitude, often times finding itself to be a bit too ridiculous, this film flourishes with great acting and an understanding of what it is. Something unexpected was how funny the movie was, but without overdoing it. The comedy that is sprinkled throughout this action-packed film is mainly delivered by John C. Reilly who portrays Hank Marlow, a World War II Lieutenant stranded on the island for nearly 30 years.

With such a great group of wonderfully talented actors, it was disheartening however to feel a little underwhelmed by Tom Hiddleston. He was enjoyable to watch, but he felt out of place. He is a fantastic actor and will forever be known for his flawless portrayal of Loki in the Marvel films. It just seemed his character was simply a sore thumb and the need to portray him as this rugged, dangerous ex-military man seemed to not match Hiddleston.

Much like it’s 2005 incarnation, the use of a motion captured performance, this time by Terry Notary, is what gives Kong his amazing personification and expressive performance. It was exciting to see him back on the big screen with such beautifully realistic CGI.

The film itself holds true to a classic monster movie, it’s sheer fun and enjoyable. It’s a film that keeps you on the edge of your seat, rooting for the big guy, and mesmerized by its scale. Even more exciting is that this film marks the introduction of the monster to the cinematic universe that will see King Kong battle Godzilla, due out May 29, 2020.

Coworkers 💻
Something that brings me joy? ✨ Harry Potter - that’s it, that’s the ‘gram (this is an old photo, I really wish I had a chocolate frog right now)