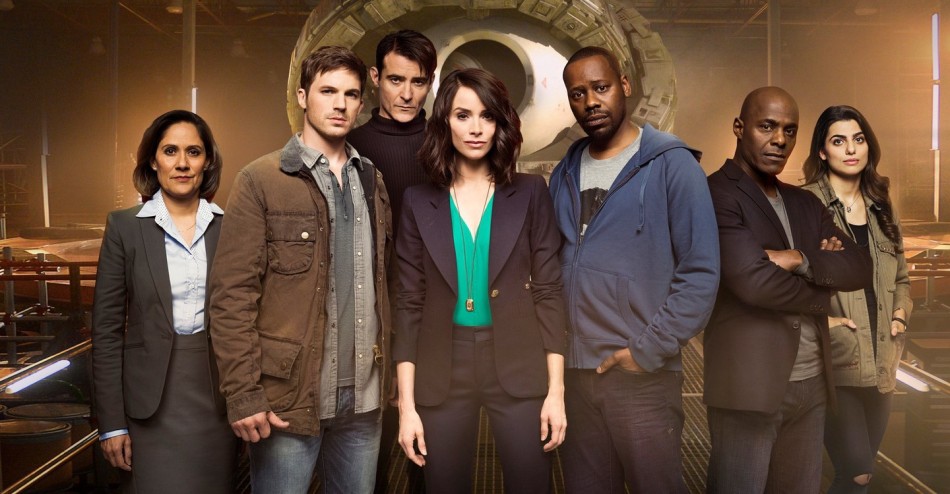 UPDATE: NBC has ordered a 2-hour series finale for Timeless to finish its story.

“While we wish we could’ve made another dozen seasons of ‘Timeless,’ this is the next best thing. We’re thrilled to take the Lifeboat out for one last spin and bring closure to our story. The studio, network, cast and crew are all doing this for one reason only: the fans. Because they deserve it. Because the fans made this happen and we thank them for their passion, support and helicopters. So? You guys want to get Rufus back or what?” – creators Shawn Ryan and Eric Kripke.

I suppose it’s time to come to the realization that the beloved science fiction series Timeless is officially gone. Fans of the show have spent the last month going through the various stages of grief. It was a hard cancellation to take, especially considering the NBC show was cancelled at the conclusion of season one, only to be renewed after a few days due to fan outrage – including famous names like Leslie Jones, William Shatner and Kelly Clarkson. Despite the resurrection and passionate fanbase, the series dwindled in viewership and was ultimately cancelled – for good – on June 22.

While there have been online campaigns to #SaveTimeless, even talks of a movie to wrap up the series, nothing has been confirmed to make the post-cancellation sadness cease. Hopes that another network or streaming service would save the day have seemingly disappeared. So while I hate to say goodbye, I think it’s time to do so while giving the series every ounce of praise it deserves.

Created by Supernatural father Eric Kripke, Timeless premiered on NBC on October 3, 2016. The series starred Abigail Spencer, Malcolm Barrett, and Matt Lanter as a time-traveling trio saving history from a secret society known as Rittenhouse, with an evil agenda. Spencer played Lucy, a history professor who was essential to the team, not only to blend into the time they travel to, but to predict what historical events may be targeted by Rittenhouse. Her two companions are Rufus (Barrett), a programmer and pilot of the time machine, and Wyatt (Lanter), a soldier who serves as the muscle for the team, using his experience in battle to aid on missions.

It was one of the greatest teams in television history. A group of people from various backgrounds coming together for one purpose. It was the perfect example of a cast with undeniable chemistry, a true testament to everyone involved. It felt so real and so honest. It’s what makes it all the more devastating.

Aside from an amazing group working in front of the camera, those behind it created a show that was progressive and inclusive in every way. Something that warmed your heart and educated us all. Featuring a queer couple with children, but making no big show of it. Simply shining light on how families of all kinds matter.

Perhaps one of the biggest and most wonderfully eyeopening and heartbreaking of all was Rufus, a black man having to travel into times where his ancestors were not accepted. With every bit of kindness and gentle humor, Rufus powered through these trying times of history, where white people would look down upon him, assume he was the help for his white companions, and so much more. It was not only educational for viewers, but also for a modern man experiencing it first hand, even if a fictional character.

The series captured so many decades for their best and worst aspects. It was a history lesson per week that kept you entertained from start to finish. It’s such an incredible shame that such a wonderfully creative series has been left after two seasons. It deserved far more opportunity than it was given, which is why it’s important to not let it die in the cancellation wormhole.

So here’s my “thank you” to every part of the Timeless team.

Thank you Shawn Ryan and Eric Kripke for creating something so fun and exciting. Taking your love of 80’s science fiction and giving it a modern spin.

Thank you Timeless Writers for bringing these stories to our tv every week. For making the characters everything we love about them.

Thank you to every crew member, PA, and intern who we don’t see, but are so incredibly important to a series.

The Clockblockers of the world will forever miss your storytelling. If you’re a fan of the series, let me know what you loved about it in the comments below!

If you want to relive Timeless, or watch it for the first time, all episodes are now streaming on Hulu.

0 comments on “A Thank You Letter to TIMELESS”