An unsuspecting old man finds himself in the midst of a prank/social experiment by two neighborhood teens. The mission is to convince him his house is haunted and see how he responds. What starts out as a cruel, yet carefully crafted prank, ends in a paranoid delusion with an emotional twist.

With the help of his MIT-bound friend Sean (Keir Gilchrist), Ethan (Logan Miller) decides to make a film project about the reaction of a haunting victim. The experiment needs to be executed without the knowledge of the test subject to maintain integrity. With a slew of high-tech devices and an impressive computer setup, the two teens choose neighborhood grump Harold Grainey (James Caan) as their unwilling participant.

The two set up cameras around his home, as well as a few tricks to produce their haunts. They rig his doors to bang, lights to flicker, temperature to fluctuate and radios to turn on at random. While Ethan seems to hold a grudge towards Grainey for various reasons, Sean is swayed by the idea of creating a solid piece of work. The reclusive old man is hostile, bizarre, and according to Ethan, abused his ex-wife. To him, Grainey deserves this.

As they begin their paranormal tech-haunts, Grainey appears to be unfazed by it all. Instead of being scared, he seems to not care, sometimes retreating to his basement for hours on end. A basement he keeps locked at all times. The boys develop a few theories, one being that old man Grainey may have someone locked away in his basement. For Ethan, he won’t stop until he figures out what – or who. 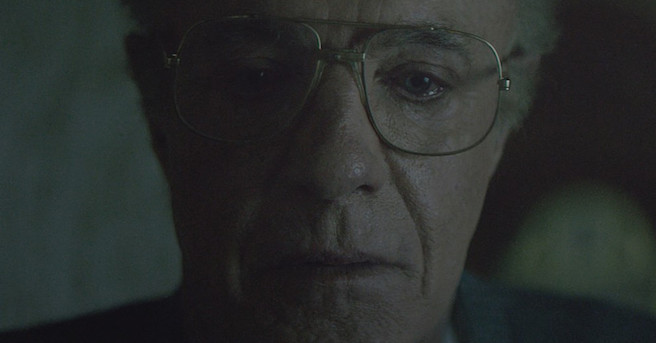 For a found-footage film in most parts, it succeeds with the teens use of high tech equipment and stationary cameras. The film sets up a great tense plot that carries throughout the film. While you’re unnerved by Grainey’s response, or lack there of, you can’t quite figure out why. This story is also told in a very non-linear way, allowing the viewer to continually change their internal theory. While we’re set up with a present-day film at the start, it turns out to be something entirely different as the current time shifts and flashbacks are also introduced.

James Caan delivers an amazing performance despite not having an immense amount of speaking time. It’s unsettling and heartbreaking. Although the conclusion causes a slight outrage for the viewer on level of believability, the film as a whole will leave you a feeling of sadness and carry with you for a while afterwards.

The Good Neighbor is currently on Netflix.

0 comments on “THE GOOD NEIGHBOR Will Haunt You”

Lazy day with my ladies 😺😺
Happy Galentines from your fave gal 😜 Biggest thanks to @pinksquirrelbar for the fun night out with my bestie. It was much needed 💕