When a single guy decides to start a family by way of surrogacy, his path to fatherhood forges an unlikely friendship that’s just what he needed. Starring Ed Helms and Patti Harrison, Together Together is a sweet comedy that explores the importance—and beauty—in platonic relationships.

Well into his 40s, and one failed marriage down, Matt (Helms) dreams of starting a family. Though being a single father might not be ideal for some, he goes forward with a surrogate named Anna (Harrison), a young loner with her own baggage. While their partnership is transactional, he can’t help but be a bit overbearing towards her.

As the pregnancy progresses, they begin to spend more and more time together, as Matt excitedly preps for baby. In getting to know one another on a more personal level, a friendship begins to form that neither could have expected, but seems to fulfill something they’ve both been missing.

Written and directed by Nikole Beckwith, Together Together is a lovely platonic story I hope to see continued in films, escaping the otherwise cliché romantic comedy. Where in the third act, instead of the realization that two people are madly in love, they come to find they’ve formed a meaningful connection in a very different way.

But even in friendship, we need strong chemistry from our leads, and we definitely get that with Helms and Harrison. The two comedians are such a match in this film and they both deliver unique quirks that have us falling for their characters. The moments where the two bond are pure joy. From Matt making Anna binge-watch Friends, to her teaching him how tampons work (se he could explain to a future daughter); everything is so relatable and disgustingly adorable.

The film also balances a level of humor in a very wholesome way. While it is billed as a comedy, the jokes are very natural and situational, instead of over-the-top hijinks. It only adds to the relatability of the characters, particularly Anna. Her perspective is really focused on throughout, and it’s so apparent in the beautiful final scene.

Together Together has a delightful story that was unexpected and the cast really takes it home. Currently in a limited theatrical release, the film will be available On Demand starting May 11th. 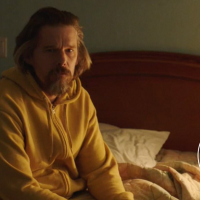