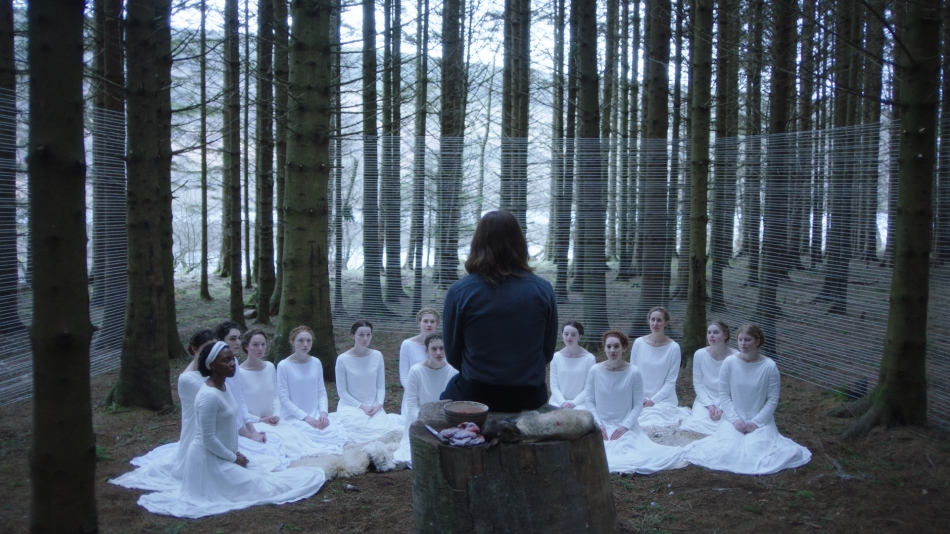 Born into a cult that idolizes a singular male figure, a teen girl begins to question the practices of their leader and seeks out the truth beyond their secluded compound. Directed by Polish filmmaker Małgorzata Szumowska, The Other Lamb is an artful piece that carries some disturbing themes, but it doesn’t quite feel like it goes there enough with the horror it teases.

Hiding in the depths of a dense forest lies the compound of an all-female cult. Controlled by their messiah-esque leader Shepherd (Michiel Huisman), they function very much like an 1800’s community, though they live within modern times. Shepherd seeks out lost souls to become part of his community, claiming that he is a prophet or some higher being to be followed. The women themselves are split between two groups, wives and sisters, the daughters of Shepherd. As wives, they are expected to perform certain “duties”, which slowly expose his darker side.

For Selah (Raffey Cassidy), it’s all she’s ever known. Born into the cult and now a teenager, she is devout to Shepherd’s ideology and religious teachings. Though in her adolescence, forms a desire to question what has been passed on as fact. As Shepherd takes a unique interest in her, perhaps as a potential wife, Selah begins to have unsettling visions, leading her to fear Shepherd is not who he claims to be.

The Other Lamb is a striking visual. There’s a serene effect it has on the viewer as we’re exposed to the vast, calm landscape wrapping around this group. It is ever-exposed as the juxtaposition to the disturbing inner-workings of the cult leader. He’s manipulative by playing into these women’s existing traumas and lack of confidence or voice. Nothing he says is anything new, but he has a presence that consumes his followers. It’s a perfect analogy for domestic violence, both emotional and physical abuse.

At its core though, is a vision of teenage revolt of a patriarchal society. As Selah gets older, like many teens, she begins to push back on how she’s told to behave and what to believe. It’s an important time in someone’s life, where their character really forms into adulthood and they find their voice. The horror arises in the third act, as Shepherd unravels when his hold on Selah and the sisters weakens. However, I craved so much more from it.

Overall, the film moves slowly — leaning more towards psychological thriller than horror. The two can coexist certainly, but they are not interchangeable. For a film billed as a true horror film, I don’t think it exposed enough darkness to leave the viewer overcome with it. Its pacing and tone are similar to The Witch but it lacks the dread that is built up with that film. I would say I enjoyed it enough to say this is worth a watch, as it explores some troublesome themes. However, I would preface it by saying it’s not one of those movies that will stick with you.

The Other Lamb is available on Hulu

Recommended: Michiel Huisman stars in The Invitation, which has similar themes about cults.

A group of monster hunters must take to a deadly battle to claim a powerful amulet, once belonging to their leader. But as they fight against one another and a vicious creature for victory, an unknown terror has infiltrated their END_OF_DOCUMENT_TOKEN_TO_BE_REPLACED

After witnessing a traumatic patient death, a therapist begins to experience unexplained horrors, the same horrors that patient claimed to have seen. Written and directed by Parker Finn, Smile is a wicked film full of nonstop frights while speaking to the impact END_OF_DOCUMENT_TOKEN_TO_BE_REPLACED

After discovering a mysterious puzzle box, a young woman and her friends discover it unlocks another dimension, releasing demonic beings inclined to collect sacrifices. More of a new adaptation than a straight-up remake of the classic 1987 film by Clive END_OF_DOCUMENT_TOKEN_TO_BE_REPLACED

0 comments on “THE OTHER LAMB Explores Abuse Within Cults”